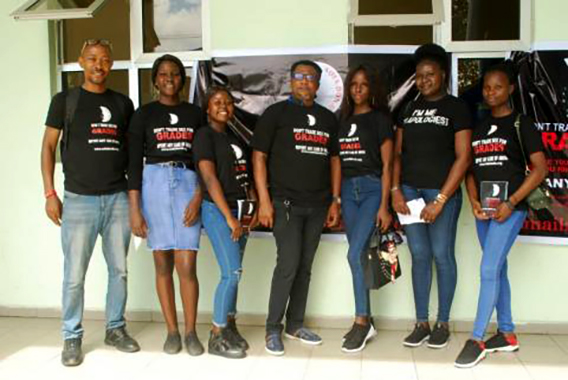 The event which was noted to be the first of its kind among Nigerian Universities, began with a welcome address by the 8th Vice Chancellor Prof. Ndowa E. S Lale. This was followed by an opening remark by Prof. Don Baridam, the University’s 6th Vice Chancellor and chairman of the occasion.
During this event, Rivers State Chapter Volunteers of Sofadondo were on ground to grace the occasion.

Sofadondo is a registered organization committed to being the voice of the voiceless, the vulnerable, the oppressed and the downtrodden against all forms of sexual harassment. It is a non-profit advocacy group, which campaigns against Sex for Marks and Marks for Sex in Secondary and Tertiary institutions. Hence, the presence of Sofadondo at this event gave the university an additional moral support to make its voice on sexual harassment heard.
The Sexual Harassment Policy was warmly welcomed by all. The University authorities promised to make the policy available and accessible on the school’s website and on all social media platform for all students and staff. It would also be shared to all fresh year students.

The launch was well attended with the Minister of Education Malam Adamu Adamu was dully represented. Over two hundred students and none students filled the university auditorium. Sofadondo was represented by 10 volunteers. The chairperson of the Steering Committee for the event, Dr. Rosemary N. Ogu, thanked Sofadondo for actively participating and making the event colourful.

Sofadondo Rivers State Chapter Coordinator Mr Chidi Onah expressed his gratitude to the university administration and to Prof. Otu Anthony Ekpenyong, Dean of Student Affairs, for giving Sofadondo the opportunity to key into the event.
Interestingly, the Rivers State Chapter of Sofadondo has Dean of the Student Affairs Prof. Otu Anthony Ekpenyong, and the Student Union Government President Sowari Daniel Dikibo as active volunteers of Sofadondo.

As an organization that campaigns against all forms of Sexual harassment, Sofadondo calls upon all schools, colleges and universities to follow in the line of the University of Port Harcourt and have a Sexual Harassment Policy that is widely known by staff and students and carefully implemented. This will go a long way in curbing the menace of “Sex for Marks” and “Marks for Sex” rampant in our institutions of learning.